This is the thirty fifth part of the ILP series. For your convenience you can find other parts in the table of contents in Part 1 – Boolean algebra

Last time we saw how to implement Special ordered sets in ILP. Today we are going to use this knowledge to implement piecewise linear approximation in one dimension and in two dimensions. Let’s start.

. We already know how to multiply numbers in ILP but representing

in this way might be computationally intensive and hence we would like to avoid this kind of formulation. However, if we don’t need to be 100% precise it might be better to approximate this function if we know the possible range of

. Let’s assume that we have these points:

we are now able to calculate the following values:

So for every known argument we simply calculate the function

are integers this looks very trivial, however, if

is a bit more complicated then precalculating the function value might greatly simplify the ILP model for our problem.

Having all these points, we declare variable representing actual argument:

as real number in range

, which we will use as an argument of function

. However, instead of simply calculating

we will approximate it using linear functions in ranges

We will use the following trick: for all linear functions we define “weights” of vertices and use them to approximate function. They are defined in the following manner:

will lie in one of the segments

thanks to SOS2 constraints. Without this stipulation would allow the

variable to “lie” on other segments, probably ranging over multiple

variables. The same goes for

variable — by using lambda variables we are able to approximate

. We have the following relation:

And now imagine that

which is quite a good approximation. However, if it happens that

is on a grid (which we can force by making

binary variables), we get exact solution.

Our approximated value is represented by variable

so in the remaining part of our ILP model we use

Approximation in two dimensions goes almost exactly the same. We have the function

and the following points: 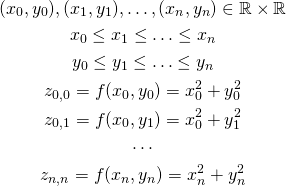 We introduce the following variables: 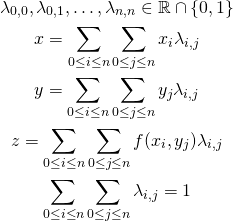 If we allow lambdas to be real numbers (e.g., we don’t require

to lay on a grid), we need to make sure that non-zero lambda variables lay on a triangle. We can do that by introducing another SOS2 set:

We know how to approximate 1D and 2D functions using special ordered sets of type 2. By using this approach we can greatly reduce size of ILP models which might significantly decrease solving time.