If you are interested in the topic see the talk page

Hi! Today we start a new series of posts in which we will see details of memory allocation in .NET. In this part we will allocate managed object of reference type on a stack. Let’s go!

These questions are odd. First, there is no hard definition of stack and heap in .NET standard, so asking about it pointless. However, without this knowledge it might be hard to track memory problems in real applications so it is worth knowing the internal implementation. So in order to ask these questions correctly, we should specify the version of the .NET we are talking about, processor architecture, operating system, and so on. Only doing that the question makes sense.

So let’s do that. Let’s assume that we have Microsoft .NET Framework 4.5 version 4.5.50709 and Windows 10 x64 running on Intel Core i7-4700 processor. Is it possible to allocate reference type on a stack using application compiled as Any CPU? And the answer is: it depends.

So what is the answer?

Today we are going to copy existing object from a heap to a stack. In one of the next parts we will see how to modify CLR in runtime in order to hijack the allocation mechanism and be able to implement allocator in C#. Let’s start.

In order to allocate a new managed object we usually use new operator. This is compiled to newobj MSIL instruction, which does the following (see MSDN):

So there are three important parts of allocation. First, we allocates some memory and set its content to zeros (the latter is done by the operating system usually). Next, we call the constructor so the object has an opportunity to initialize itself. Finally, we store reference to the object on a stack. Since we will be mangling with the memory, let’s leave the high-level nomenclature and call it a pointer (yes, old and dirty pointer like in C++ language).

In order to allocate object on a stack we might try to modify the first part of this process and point CLR to other place in memory. However, this would be too deep water for the first time, so today we will ask .NET to allocate object on a heap, and then we will copy it on a stack. Next, we will verify that the object is usable, so we should be able to do the following:

Value types are stored very easy: they are just a bunch of bytes representing the value:

Pointer points directly to the object memory so we are basically not able to tell anything about it without knowing its type. As a side note: this also explains why we need to specify method table address when using !dumpvc command in WinDBG.

Reference types are completely different. We have a thing called reflection which allows us to inspect object’s methods, fields, properties etc. In order to do that, we need to know the object’s type. All the magic becomes obvious when we check the memory structure: 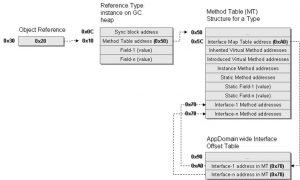 As we can see, pointer points to the thing called Method table address. This is a pointer point to the Method table, which describes the object. It contains all the information about methods, fields, inheritance hierarchy etc so we are able to inspect the object with reflection. After the method table address there are fields of the object. It is also important, that the object does not contain any methods. Object is just a bunch of fields, all of the other stuff is stored somewhere else. From the internal point of view, all instance methods are static and they accept one additional parameter: pointer to the object.

It is also worth noting that there is a thing before the object called Sync block address. This is used to lock objects with lock construct.

Now our task is a bit more clear: in order to copy object, we need to know its size, copy all the fields, sync block address, and method table address. This should allow use to do all the things we would like to do.

In order to read and write memory we will use two undocumented C# keywords: __makeref and __refvalue. The former allows use to create a Typed Reference from a reference, the latter allows use to reverse the process. Typed reference is a some kind of a pointer which allows us to directly access memory. It is sometimes used to speed up code using value types in order to avoid boxing. We can also get its address and end up with the following indirection:

Having that, we will be able to copy memory to the stack. In order to use the object, we will need to create a reference to it, and here is the time when we use __refvalue keyword.

It is high time to write some code. We start with the following class:

We simply define a structure with one integer, one non-virtual method (WriteField), one virtual method (ToString), and a destructor (or rather finalizer).

Next, we allocate some memory on a stack and an object on a heap:

As we can see, we have an object on a heap with its field initialized to five, we also have ten integers on a stack allocated with stackalloc. We set these integers to BADF00D in order to be able to find them on a stack. Compile this code (don’t forget to allow using of unsafe keyword in build options), run it with WinDBG and execute the following commands:

Next, dump the memory on a stack with dd and observe that indeed we have bad food on a stack.

Now, let’s get a pointer to the object:

Now, we copy the memory:

We need to copy exactly three integers (sync block, method table pointer, one field). You can now verify that we wrote some bytes on the stack (remember the bad food pattern?).

We now have our object on the stack. Let’s create a reference to it.

You should get the same two values (five in both cases) since we copied the object.

Next, let’s modify the values:

Now you should get two different values.

We can also modify our object using the int array we declared at the beginning (since the object is in the same area):

We can call virtual methods:

We can also verify that our object is correctly recognized:

You can also try to register object for finalization — its destructor should be called when the next collection occurs. However, please don’t do that!

We can also try to lock the object:

Cool. You can see the whole code here.

As we can see, it is possible to allocate object on a stack. In the next part we will examine this idea to implement list which stores objects instead of references to them. Stay tuned.