This is the first part of the Concurrency series in which I explore performance of various locking mechanisms. Once working on a pet project I started wondering how fast is a system wide lock in Windows so I decided to run few simple “benchmarks” just to get the general idea.

The benchmarks are deliberately done this way so I can compare different languages in the same manner. Do not take results for granted, do not consider them reliable.

Here is the code:

Nothing special, just a named mutex and stopwatch. I try to measure the time to acquire mutex 100 thousand times.

Here are the results: 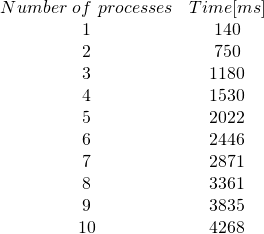 As we can see, to acquire mutex given number of times with 10 processes trying to do that concurrently we need over 4 seconds which gives 0.04 ms for single acquire + release.

In next parts we will see different mechanisms, their performance and quirks.